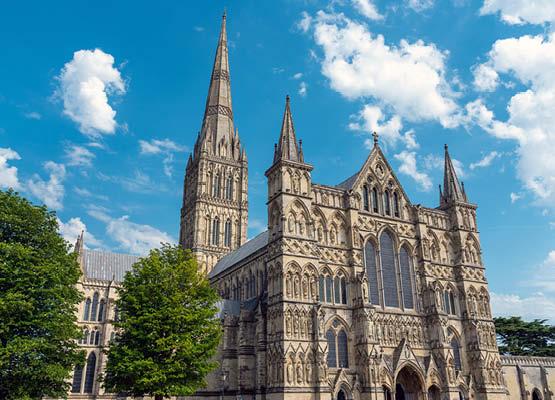 Salisbury is just 10 miles from Stonehenge, the prehistoric monument in Wiltshire. This is a must-see landmark that will have you pondering over how the 13 feet tall standing stones, that weigh around 25 tons each, were placed perfectly in a circle on top of this bank. Archaeologists believe the Stonehenge was constructed from 3000 BC to 2000 BC, and that it was used as a burial mound.

Salisbury is also renowned for its Early English Gothic Cathedral that is home to the Magna Carta, which is the best preserved of the four original Magna Carta manuscripts. The Magna Carta, which dates back to 1215AD, documents the signed promises between the rebel barons and King John. The first Salisbury Cathedral was originally built at Old Sarum in 1092, however due to disputes with the military and lack of water supplies; it was then moved in 1220 to the New Sarum.

The streets of Salisbury are paved with rich history and architecture, such as the timbered black and white buildings. Salisbury’s museum is situated within the King’s House, a grade I listed building which dates back to the 13th century.

The city, which is surrounded by several rivers, including the River Avon, the River Nadder and the River Bourne, also has a popular high street and independent shops, as well as a thriving market. The city also has an inspiring art scene, with regular exhibitions and many galleries to explore. Visitors can enjoy leisure activities, such as strolling along beautiful countryside footpaths, cycling, golf and skydiving.