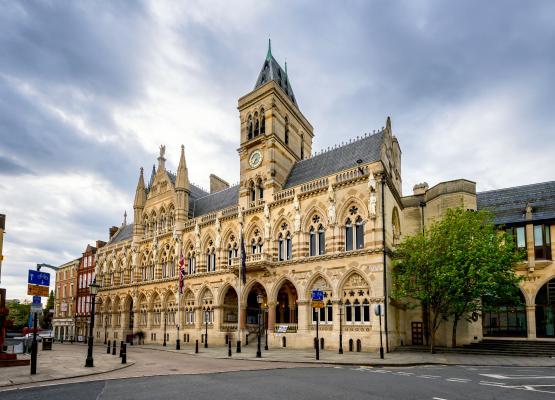 Situated in central England, Northampton is one of the oldest and largest towns in the UK. You have to go all the way back to the Bronze age, 3500 years ago, to find the original roots of the town, where it’s believed that Neolithic settlers carried out tribal ceremonies in the area.

Between William the Conqueror’s invasion and up to and including the English Civil War, disease and destruction battered the town. In more modern times though, owing to the industrial revolution, the population and economy of the town have grown immensely – shoes were an especially successful export of the town, and remains a focus of the local economy.

Today you can look back in time via the galleries and museums situated in the town. 78 Derngate is particularly interesting to those with an arty interest, being the only house in England designed by the famous architect, Charles Rennie Mackintosh. Visit the house and you’ll find a museum and art gallery celebrating the man himself.

Commerce has been an important part of Northampton’s past, and the market square is one of Britain's most historic and biggest, dating back to the early 13th century. If shopping isn’t your thing, Northampton Carnival and the spectacular Balloon Festival will surely provide ample entertainment.