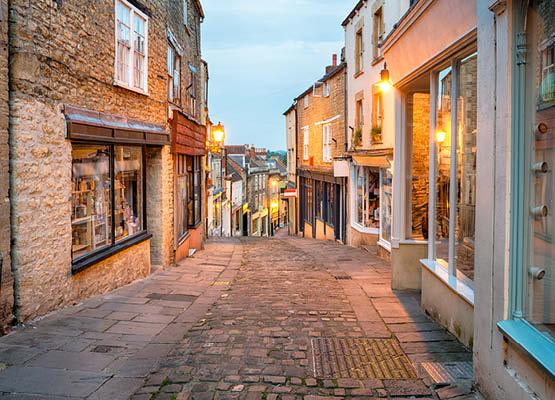 Frome, in eastern Somerset, possesses a historical town centre filled with a wealth of architectural styles, from The Blues House, built in 1726, to St John’s Church, restored in the mid-19th century but thought to have originated as a medieval building on a Saxon site dating back to 685 AD.

With an active and thriving contemporary performing arts scene, Frome has no shortage of creativity and inspiring events for visitors to attend. Frome also holds a number of annual events, such as Frome Festival, Frome Agricultural and Cheese Show, Frome Carnival, Christmas in Frome, and the National Canoe Slalom.

The picturesque moated and medieval Nunney Castle ruins are well worth a visit. Built in the 1370s by a local knight, Sir John de la Mare, and modernised in the late 16th century, shortly after it was damaged during the English Civil War, the castle remains a point of interest in the town.

You can find yourself a bargain in one of the many markets that Frome has to offer, including The Frome Independent Market and St. Catherine’s Artisan Market. Markets are a part of Frome's identity; since the 11th century the town has been the original and main Market Town of Somerset.

Frome also has spectacular art galleries, fascinating museums, an array of high street and independent shops, historic buildings and churches, and Longleat Safari Park is only a short distance away.