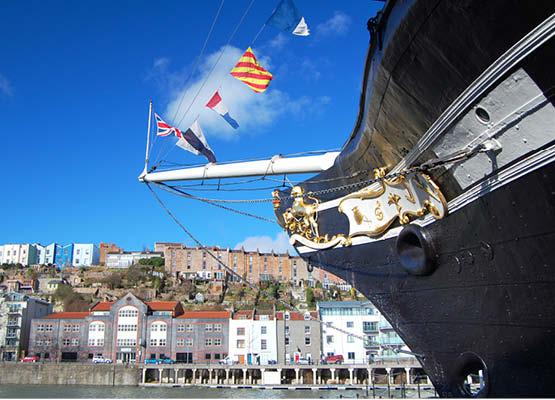 Board and explore the ship that changed the world. The largest vessel of its time, the SS Great Britain played a key role in Britain’s seafaring and ship-building history before becoming a museum.

The ship traversed the Atlantic Ocean, transported immigrants to Australia, served as a troop ship in the Crimean War and the 1857 Indian Mutiny before later becoming a cargo ship. The ship was eventually scuttled in the Falkland Islands in 1937 after 50 years as a coal hulk, quarantine ship and warehouse.

Now a museum ship, the SS Great Britain has been returned and restored at the Bristol dry dock, where it was built– here visitors can step back in time and discover the true stories behind the ship that changed the world.

The SS Great Britain experience has been divided into six sections and features a gift shop and café. The dockyard where the ship is based has been there since 1839 and the dry dock (which is now a grade II listed building) was purpose-built for the SS Great Britain. The Dockyard Museum has visitors travelling through four different time zones where they’ll discover dramatic stories from the 1840s, 1850s, 1880s and 1940s.

Visitors can access the Brunel Institute, which houses one the world’s finest maritime collections, where they can access objects held in the archive vault and use the specialist David MacGregor Library free of charge. As well as board the historic ship where they can experience the sights, sounds and smells of life on board for Victorian passengers and crew.