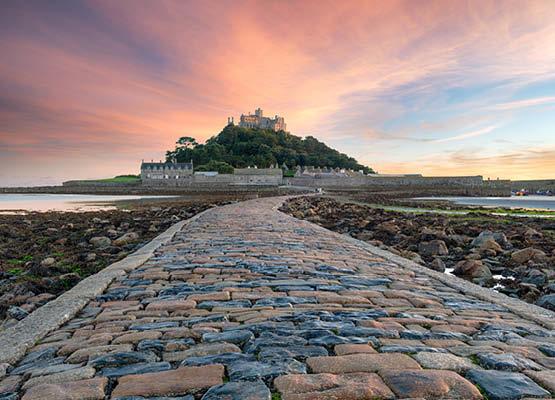 The picturesque St Michael’s Mount, which has a population of 30, can be seen from areas around Mount’s Bay, including the popular Cornish town of Penzance. The distance from Marazion, the closest town, to the island is only 500 metres and can be easily walked to when the tide is out. The earliest buildings on the island date back to the 12th century.

The island, which is owned by the National Trust, was historically the counterpart of Mont Saint Michel, in Normandy, France – even though Mont St Michel covers 247 acres, whilst St Michal’s Mount only covers 57 acres. St Michael’s Mount is 1 of 43 tidal islands that you can walk to from mainland Britain.

Although the island is only small, you will find plenty to explore and see; from the castle, to the chapel, to the sub-tropical gardens, to the harbour and of course the little idyllic village. The castle, which has had many different purposes over time from a priory to a fort, to an iconic castle and then transformed into a family home, has an array of interesting rooms which all have their own stories to tell.

From the gripping tales of the castle you can then find yourself in the peaceful and rather unexpected tropical gardens. You will find tropical plants from the likes of Mexico and South Africa. The winding pathways and steep Victorian stone terraces will allow you to enjoy the entire garden and relive some incredible memories that the island has witnessed, such as at the wartime pillbox – where in WWII, soldiers once kept a lookout for German aircraft.