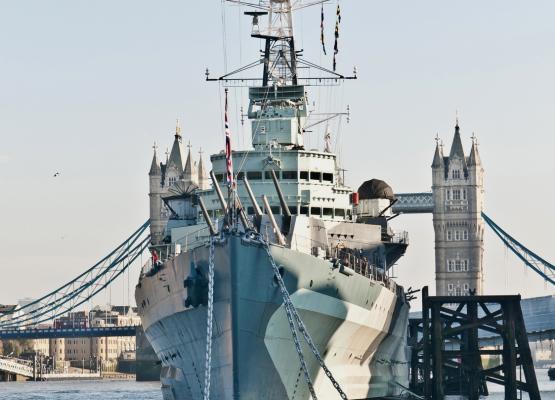 Since its launch by the British Navy almost 80 years ago in 1938, HMS Belfast has served in both peace-keeping duties and key battles across the world, including the Battle of North Cape, D-Day and Operation Overlord, it also played key roles in the Second World War and the Korean War.

Permanently moored on the River Thames next to Tower Bridge, visitors can come aboard and explore the nine historic decks of the iconic ship and hear the personal stories of the crew who lived and served on board.

Learn what life was like at sea, climb up and down ladders and take the helm in the Captain’s chair and navigate Europe’s only surviving Second World War cruiser. Man the action stations in the Operations Room and help recover a downed plane. Keep a lookout up on the flag deck where there are amazing 360-degree views of London, and delve deeper into the boiler and engine rooms 15ft below sea level. Visitors can witness the warship in action in the Gun Turret Experience, and see what it was like to sleep on the ship with tightly-packed hammocks hanging in the Arctic Messdeck.

Whilst on deck explore the Voyage of Discovery, hunt around the ship and search for clues and discover lesser-known facts about this legendary vessel.