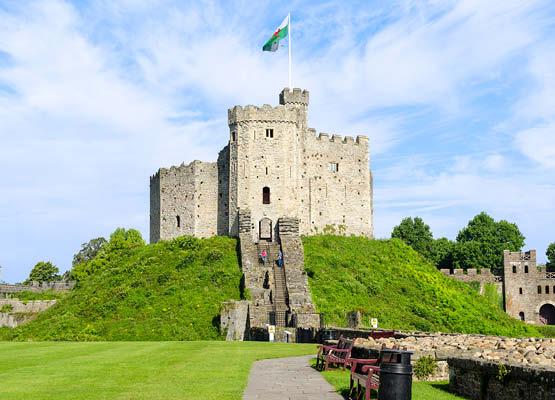 Built by Norman invaders in the 11th century, the castle has endured multiple attacks, particularly in the 12th century during the conflict between the Anglo-Normans and the Welsh. Today, the castle stands as a popular tourist attraction in Cardiff, Wales. You can easily access Cardiff with a direct train from London.

Cardiff Castle was built upon a Roman fortress and later transformed into a Victorian Gothic fantasy palace. You can explore the castle’s fantasy-like apartments with its wonderful murals, highly skilled woodcarvings, stained glass and marble. Every day a house tour runs which will allow you to see some of the most highly decorated and mesmerising rooms in existence. The guide will take you through the winter smoking room, the nursery, Lord Bute’s bedroom and the rooftop garden.

The castle also features a clock tower, spiral staircase, wartime shelters, the Norman keep and the Roman wall. The clock is a well-recognised landmark in Cardiff and the wartime shelters were a safe place to stay in during the bombings in WWII. The castle holds events from time to time including a jousting and horsemanship show presented by The Knights of Royal England. Cardiff is a city with many stores, restaurants, a shopping centre and its own nightlife; there is so much to do in the city with many ways to be entertained.