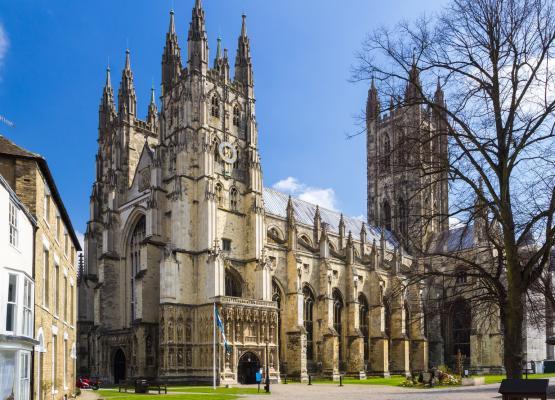 Both a holy place and part of a World Heritage Site, Canterbury Cathedral is home to stunning architecture and a 1500 year history. The cathedral is the oldest and most famous Christian structure still in existence, attracting almost a million visitors alone in 2016.

In 597 AD, Pope Gregory the Great sent Augustine, a Prior of a Roman monastery, to Britain to lead the Gregorian Mission, a mission to convert King Æthelberht to Christianity. Once the King converted he granted the missionaries the right to preach freely, giving them land to found a monastery outside the city walls. Augustine then established his seat, or cathedra, in Canterbury.

Visitors to the cathedral will be able to stand on the exact spot where Archbishop Thomas Becket was murdered in 1170, thus making the site one of Europe’s most important pilgrimage centres - most famously referenced in Geoffrey Chaucer’s Canterbury Tales.

The Romanesque crypt inside the cathedral dates back to the 11th century; there is also an early Gothic 12th century Quire and a Perpendicular nave dating back to the 14th century. Visitors can marvel at the beautiful medieval stained glass windows that illustrate royal connections, bible stories and miracles.

Those who visit Canterbury Cathedral must take the time to visit the tranquil ruins of St Augustine’s Abbey, a 6th-century Benedictine monastery founded by St Augustine, and also see the historic St Martin’s Church – together the two form one of Britain’s few World Heritage Sites.